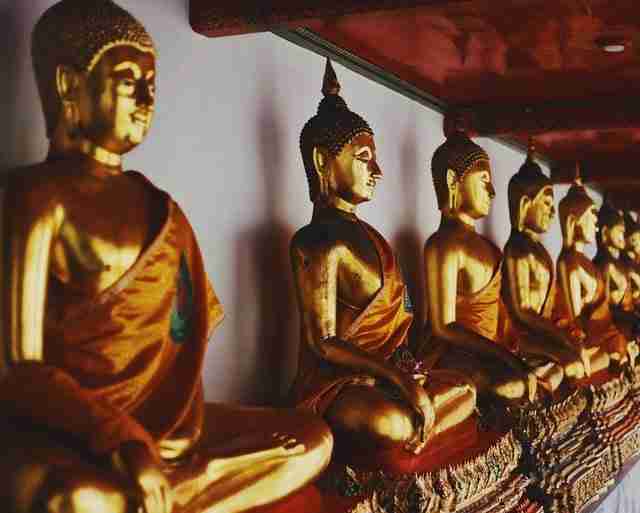 Thailand is glorified as The Land of Smiles for many reasons—and its intricately designed temples are one of them. The majority of Thailand’s population are Buddhists, and they have built grand, towering structures as a sign of their faith and devotion. The Chiang Rai Times points out that there are over 40,000 Buddhist temples across this tropical country and each of them has something unique to offer. Be sure to save up for plane tickets and ready yourself for a trip half-way across the globe because these architectural wonders are unlike any other structures in the world.

Thailand deserves to be one of the top tourist destinations because of their gorgeous temples, warm people, and pristine tropical beaches. The best part? According to ExpatBets, you can easily go temple-hopping on a budget with the use of their highly accessible transport system.

Hop on a ferry and witness the grandeur of Bangkok’s Chao Praya River as you travel from Wat Pho to Wat Arun. The extensive railway systems can take you from the capital to the historic city of Ayutthaya or the misty mountains of Chiang Mai. All you have to do is book that flight to witness the following remarkable temples in Thailand.

Start your tour with the most sacred Buddhist temple in Thailand, which can be found within the Grand Palace in Bangkok. The temple is definitely gorgeous even from the outside due to the vivid colors and intricate carvings that are adorning its exterior. You can even spot the tall golden spires shooting up from the roof of Wat Phra Kaew beyond the white walls that encase the palace grounds.

The main attraction, of course, is the Buddha statue that can be found inside the ordination hall. Despite its name, this sacred image of Buddha is actually made of jade and clothed in gold. After paying respect to Buddha, you can explore other structures around the temple, such as the Phra Mondop or the book depository, the Bell Tower, or even the model of Angkor Wat!

You can walk for half a mile or take the train to get from the Temple of the Emerald Buddha to the Temple of the Reclining Buddha. Also called as Wat Pho, this temple is one of the first-class royal temples in the country.

Bangkok Post cites that the best craftsmen of Thailand built this temple and distinguished it among many others through the life-size Chinese statues and colorful pagodas. It houses the most numbers of Buddha images in Thailand and even contains a 151-foot long reclining Buddha statue! This temple is also the birthplace of Thai massage, so you can learn the practice or simply enjoy the service here.

Ride a boat and cross the Chao Phraya River to reach Wat Arun from Wat Pho. The riverside temple reflects a pearly radiance once its porcelain exterior is hit by the rays of the morning sun. You will also clearly see the intricate carvings that adorn each spire of the temple.

Visitors can also explore the temple’s central prang, which contains a golden image of Buddha. You can also climb up to the top for a good view of the river and the Grand Palace.

Wat Chaiwatthanaram is located in Ayutthaya, a city 50 miles away from Bangkok. Tourists can take a train or minivan to get to Ayutthaya in less than 1 hour and 30 minutes. In a half day tour, you can explore the previous capital of the Siamese kingdom during its peak.

The Wat Chaiwatthanaram temple was created in traditional Khmer architecture, which is why the ruins are stone structures with concentric enclosures. You can admire the stucco relief panels that have remained on the exterior of the remaining halls. Once you go inside the main prang, you can admire a shrine of Buddha’s image and view various murals that depict the Jakata tales.

You’ll need to ride a train from Ayutthaya or Bangkok to reach the ancient city of Chiang Mai. New York Times states that this place is worth the long escapade because of its markets, elephants, artisans, and temples.

It really does pay off to trek to the foothills of the Himalayan Mountains because Chiang Mai offers quite the view. Wat Palad is a must-see temple located within the city because it is surrounded by lush greenery and rock waterfalls. As you pass by the bridges and the footpaths, you will spot statues of Buddha standing side-by-side with the tall trees. No matter what your beliefs are, you’ll agree that the views of the temple and the city below are worthy of praise.

There are thousands of temples that you can visit in Thailand, and each one of them will surely blow you away. These religious structures prove that the country has a rich history and culture, which definitely makes it worth visiting! Once you’ve explored Thailand, you can cross the border and explore its neighbor: The beautiful Laos!