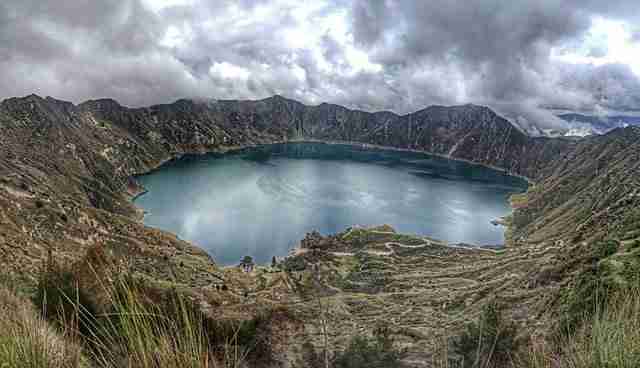 Favelas painted in vibrant hues of the rainbow beam as bright as any lighthouse on top of Guayaquil’s ancient neighbourhood, Las Peñas. The adjoining colonial buildings, the Malecón overlooking the Guayas River, the bustling streets, and a Ferris wheel, that shoots multicoloured sparks at night, radiate a palpable energy. But when you’ve had your fair share of city life, many of Ecuador’s natural and man-made wonders are within easy reach.

Whether you’re fascinated with Ecuador’s culture, wildlife and indigenous peoples, or looking to make your own chocolate at traditional cocoa farms, these weekend and day trips from Guayaquil in Ecuador are sure to refresh any city-tired traveller.

The wildlife of Ecuador is only one of the reasons this national reserve should be on your list of day trips from Guayaquil.  You’ll also be able to embark on a boat ride through meandering estuaries and channels. Here, the dense labyrinth of intertwining branches of the mangroves will seem surreal, while the dry forest walk from the visitor centre offers the chance to journey to a nearby cocoa plantation. Here, you can taste their chocolate and settle down to a lunch prepared with local ingredients.

Make sure to wake early as you’ll have a long drive across breath-taking scenery. However, the trek is worth the effort because what awaits is Shalala’s Viewpoint. Here, you’ll see a staggering vista of an emerald coloured, water-filled crater lake that emanates the same warmth and tropical appearance of the Caribbean islands.

Changing color according to the location of the sun and located in the middle of the Andes, Quilotoa Lagoon is the day trip that keeps giving. For those who wish for a closer view, you can undertake the two-hour hike down to the lake. Once at the bottom, you can even swim in the calm of the lagoon. Then, head to the surrounding local communities where you’ll sample regional, mouth-watering Ecuadorian food, explore artisan markets, and visit indigenous farmlands.

Here, you’ll embark on a small rustic boat called a lancha, and you’ll have the chance to photograph the dolphins leaping as they swim alongside the boat. Back at the dock, there’s an abundance of local, fresh, and live seafood restaurants. And the Ecoclub Los Delfines museum houses dolphin skeletons and displays information about the local ecosystems.

Love wildlife destinations? Kauai, Hawaii is also a great please to hang out with sea lions.

Situated just 9 miles from Guayaquil, the Bosque Protector Cerro Blanco is one of the few areas of land in Ecuador that has dry forests. Its proximity to the city makes it one of the easiest day trips from Guayaquil. As a privately run wildlife reserve, its owners’ goal is to rehabilitate the surrounding acres with the hope of providing more habitable areas for endangered species. They also work towards protecting the remaining dry forest. As a result, these forests have some of the best hiking opportunities in the country.

There are three different trails ranging in length and difficulty. On these hikes, travelers will undoubtedly see howler monkeys, lizards, jaguars, pumas, deer, and raccoons. With over 200 bird species, including the reserve’s symbol – the great green macaw – there’s a big chance you’ll see some colorful inhabitants.

For centuries people have bathed in hot springs as they’re believed to ease the mind and cure all ailments. Among the best hot springs in Ecuador are the Zhagal Hot Springs, known for their secluded and tranquil environment and medicinal properties. Less known by tourists, travellers here have the opportunity to experience a natural massage by soaking in the mineral-rich water.

They can also experience how the varying temperatures – mixing between hot and cold – can have different effects on the body. Situated in a forest clearing, Zhagal hot springs are surrounded by lush vegetation, which not only allows your body to unwind but also allows your mind to switch off and tune into the natural sounds of Ecuadorian wildlife.

A two-and-a-half-hour bus drive from Guayaquil, Montañita ticks all the boxes for those who want sun, sand and sea. Located in the Pacific West and considered a premier surf destination, Montañita is among the best day trips from Guayaquil. It’s the perfect coastal town for warm sunsets, hand-craft shops, bohemian nights, and excellent Ecuadorian food.

Opt for a leisurely jaunt around the town which takes only 15 minutes to walk in its entirety, then head to the beach for some quality surf time. To replenish yourself, try the various types of Ecuadorian street food on offer. Why not taste some of the local favorites such as empanadas, pizza, and chocolate pastries?

Known as “the poor man’s Galapagos,” Isla de la Plata is the exotic island trip of your dreams. Turquoise seas, rugged cliffs, and stretches of beaches form this small island. Simply take a bus or shuttle from Guayaquil to Puerto Lopez, and then jump on board one of the yachts carrying select groups of 16 people to the shore.

Here, travelers can choose to snorkel, observing coral reefs among an extensive biodiversity of aquatic life. Expect to find sea lions, manta rays, dolphins, angelfish, and sea turtles, as well as humpback whales. Alternatively, pick one of the two circular footpaths that takes you around the island, each taking roughly three hours to walk. These trails will bring you face-to-face with exotic birds like blue-footed boobies, pelicans, albatrosses, and frigate birds.

Formally used to connect Guayaquil on the Pacific Coast with Quito in the Andes, the Nariz del Diablo train now transports travellers to the bucolic countryside between Alausí and Sibambe. Translated to mean “the Devil’s Nose”, Nariz del Diablo is one of Ecuador’s most extraordinary man-made creations, zigzagging and ascending more than 500 meters in less than 12kilometres. The easiest way to reach the Nariz del Diablo is to pre-book your train journey with Viator, as they’ll privately pick you up from your Guayaquil hotel.

Alternatively, hire a car or take the train from Guayaquil to Alausí. On arrival, grab a quick bite in the Café del Tren before heading to the train. Once onboard, you’ll leave civilization behind you for serpentine rivers framed by steep mountains. Your guide will explain the railway construction before you arrive at Sibambe, where llamas await, and traditional dance performances greet you.

The Tren del Hielo is among the best things to do in Ecuador. One of the most popular weekend trips from Guayaquil, this can also be done as a weekend trip from Quito. Starting in Riobamba, the staggering Capacu Urcu volcano glistens on the horizon with its summit crowned by five peaks. This contrasts with the vibrant, bustling markets and traditionally dressed inhabitants of the town itself.

Once the train takes off and stops at Urbina station (the highest train station in Ecuador) guests have the chance to meet the 75-year-old Baltazar Ushca. Mr Ushca is known as the last ice merchant who braves the dangerous climate on a weekly basis to harvest fossil ice from the bowels of Taita Chimborazo. Taita Chimborazo is the highest peak in Ecuador and the closes point on Earth to the Sun. Prior to setting off from here, travellers can try paila ice cream and learn about the descendants of the Puruhá.

Yearning for a sophisticated afternoon among horses, chardonnay, and a three-course meal comprised of Ecuadorian food? Look no further than Hacienda La Danesa. Going back 145 years, three generations of the Olsen family have farmed on this plot of land. Now, guests are welcomed and encouraged to join in with the mountain trails on horseback alongside a Montubio cowboy. Dining on locally harvested ingredients isn’t the only food-related activity: try your hand at making chocolate using cocoa straight from the family plantation, then milk the farm’s famous cows and sample a café au lait with the milk you just produced. For those who aren’t ready for the day trip to end, spend the night in one of their recently restored stable rooms furnished with local artwork.

Outside of the capital, Cuenca is home to the nation’s best-preserved colonial architecture. Some structures even date back to the 16th century. Cuenca Ecuador’s iconic skyline boasts towering steeples and massive rotundas set against a backdrop of rocky mountain tops. Many travelers feel like they are stepping back in time as they stroll along Cuenca’s cobblestone streets past the famed blue domed Catedral Nueva and 16th century Catedral Vieja.

Even though a trip to Cuenca is only a 3.5 hour drive, which falls into day trip from Guayaquil range, it really warrants at least a few days to explore. Add it to your Ecuador itinerary and make it a base to explore many fantastic day trips from Cuenca.

All the aforementioned day trips from Guayaquil can be pre-booked by local tour companies or Viator, or can be achieved independently by renting a car and taking the bus from Guayaquil.

Atacama Desert Travel Guide: Things to Do, Where...